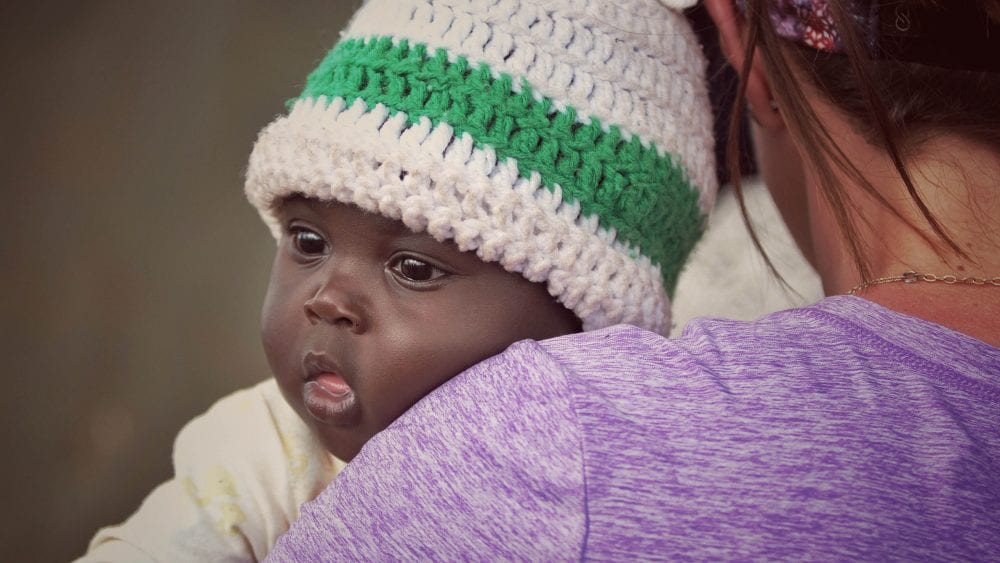 Nearly half a million children in the U.S. are in need of a home.

Judy Ames loved the idea of being a foster parent, but she hesitated to broach it with her husband Richard and their youngest daughter, who was then 12 years old.

But she wasn’t the only one whose eyes had been opened to the possibility. Like Judy, Richard had noticed there was a foster family in their Sugar Land, Texas, parish — and took comfort in seeing how the parish embraced that family. Then one day a Catholic Charities foster family recruiter came to Mass and gave a short talk about the great need for foster homes. So the Ameses visited Catholic Charities to learn more, and “next thing you know, we were fingerprinting and babyproofing” for a child being placed with the Ames family that they were told was named Dorothy, Judy recalled.

But when they went to pick up their foster child, they discovered there had been a mistake. Her name wasn’t Dorothy after all.

Her name was Faith.

“That was a statement to us that this was meant to be,” said Richard.

Faith was the first of about 75 babies that the Ames family has fostered over the course of 26 years. Though that number may sound high, it’s not all that unusual. Growing up in Southern California, JC Amezcua, 27, had about 100 foster siblings.

Both she and her mother, Noemi, work for FosterAll, a Southern California organization that partners with Catholic parishes and other churches to recruit and assist foster families through the process (but does not actually place children with families).

There are some questions they field over and over again: How do you handle children with behavioral problems that result from the dysfunction they might have experienced in their birth families? Or how can you bear to say goodbye to a foster child who is being reunited with his birth family?

“You do have your ups and downs with them,” Amezcua said. “These children do come home being very, very scared, traumatized, with a very negative attitude.”

The Amezcua family meets those challenges by treating each child as part of the family.

“We’re there for them, to be their friends and family,” she said. “Within two weeks, they will open up — call you mother, father, sister. Once you see they’re happy with you, they feel confident and safe with you. All those troubles, you forget about them.”

Saying goodbye to a foster child doesn’t get any easier, but going into the situation with the right attitude is a big help. “God has placed them in our way … to give them the happiness you have with our family,” Amezcua recalled her mother telling her.

“Everyone should be with their family.”

And that’s typically the goal of foster care: to place children in a safe environment, temporarily, when their birth parents are unable to care for them — and then to re-unify them with their family when the situation has improved.

Not every foster child is reunified with his birth family, however. According to the National Foster Youth Institute, on any given day, about 100,000 children in the foster-care system are available for adoption. Amezcua’s mother adopted three of her foster children; the Ames family adopted the fifth baby they fostered.

And while reunification may be the goal, in reality, it is not always an ideal situation for the child. As much as birth parents might wish to live with and care for their children, a drug or alcohol addiction or a propensity for violence might make that an impossibility.

But the temporary loss of a child can sometimes inspire parents to change their ways, as the Amezcua family experienced firsthand. JCremembers a 5-year-old girl her mother fostered who had been badly scalded by her father. The child underwent multiple operations, and the Amezcuas had to change her dressings and bathe her multiple times a day.

When it was ultimately decided the girl would be reunited with her father, the Amezcuas felt trepidation — but JC pointed out, “God is amazing.”

“Throughout the years, my mom kept in communication with this girl and the family,” Amezcua said. “Her dad was completely changed. This guy turned around.”

One Child at a Time

Ron Bertsch is the director of therapeutic care/adoption services for the DCCH Center for Children and Families in the Diocese of Covington, Kentucky — and when he first came to the DCCH, he used to handle the whole caseload himself, about 30 children each month.

Last month he had 321 children referred to his agency — and that’s about the monthly average these days. In June, there were 9,875 children in the system in Kentucky, the second-highest number in the state’s history. (Across the nation, there are about 400,000 children in the foster-care system.)

“I can’t serve them because I don’t have enough families,” Bertsch said. “It’s a drop in the bucket.”

And the children referred to him aren’t exactly easy cases, he added. Often he is working to place older children, minority children and groups of siblings with foster families. “My kids are traumatized, abused, living in dysfunctional families,” Bertsch said. “What we really need are people who are open to a foster-to-adopt situation. We hope that in the 12- to 15-month time limit we give birth parents, [the child] can go home — but if they can’t, now you become the adoptive family.”

In fact, Bertsch and his wife adopted four siblings and raised them alongside their biological daughter — something they were able to do because their parish supported them by helping to transport the kids to their extracurricular commitments, preparing meals for the family and even helping out with homework.

Fostering is “helping take the pro-life movement to the next level,” Bertsch said.

“How do we support the child now that [the parents] realize they can’t do it because they’re still making poor choices? Isn’t the pro-life movement about more than just abortion?”

Based in the Diocese of Grand Rapids, Michigan, Catholic Charities West Michigan (CCWM) is the largest service provider in that region of the state, with a caseload of more than 300 children. According to CEO Chris Slater, CCWM works with 175 families, some of them fostering multiple children or sibling groups. When a child is referred to the organization and there’s not a foster home available, that child will often go into a group home, “which is not the best-case scenario,” he said.

“With infants and young toddlers, we don’t have problems finding people who are willing to take them. It’s the 12-year-olds and up, to be honest, that nobody wants to foster.”

It’s abuse and addiction that most commonly cause children to enter the foster-care system — and that is a tremendous problem. But for the people working with those children, the biggest challenge is that there are not enough foster families to meet the need.

Certainly becoming a foster parent is a huge decision — a life-changing decision. But people who have fostered children know that change can be beautiful.

Although Jude and Richard Ames have been angry, saddened and disappointed by some of their experiences, Judy said firmly, “Our lives have been changed for the better by doing this.”

“We see this as a vocation in our lives,” Richard added. “We have been given gifts to help us get through the hard times. We’re thrilled to be able to continue.”

Not every person is cut out for foster parenthood, and not every home is prepared to accept a foster child. But anyone can give of their time, talent and treasure to help those children who are in the system. A few ideas:

On the Wrong Side of the Law?

Across the country, Catholic and Christian foster-care organizations are facing legal action due to the way they operate: placing children with families where the parents are a husband and wife.

Because of these challenges, Catholic Charities of Boston was forced to terminate its adoption services, as was Catholic Charities of San Francisco. Earlier this year, Philadelphia’s Catholic Social Services (CSS) sought — and was denied — an injunction that would have forced the city to renew its contract despite the fact that CSS does not place children with “LGBT” families.

And this spring, the Michigan attorney general barred state funds from adoption agencies that won’t place children with same-sex couples.

“Obviously, the attorney general’s office in Michigan … is under the belief that we should not be able to operate under our religious beliefs,” said Catholic Charities West Michigan (CCWM) CEO Chris Slater. “Our belief is that every child deserves a loving home with a mother and a father.

“They try to make this about LGBT issues, and it’s not. We want to put the kids first, and that’s it.”

Slater added that the overwhelming majority of Michigan agencies are willing to work with LGBT families — and CCWM has never turned away an LGBT would-be foster family because none has ever approached the organization.

“Our belief in marriage is firm, and we believe the best case for the child is with a mother and a father, and that’s what we’re fighting for,” Slater said. “Their message is that we’re fighting other things, and certainly that’s not true.”

Ultimately, the more organizations that can serve children in need of families, the better, he added. Forcing Catholic and Christian organizations to violate their deeply held beliefs ends up hurting the kids more than anyone else.

Recently an area Christian organization announced that it would serve same-sex couples, and two of the families working with that organization asked to be transferred over to Catholic Charities West Michigan.

“I don’t know how many of our 175 families will bail [out of fostering, if we stop foster services], but for the state to think they could transfer to another agency and everything will be fine,” said Slater, “that’s misguided.”