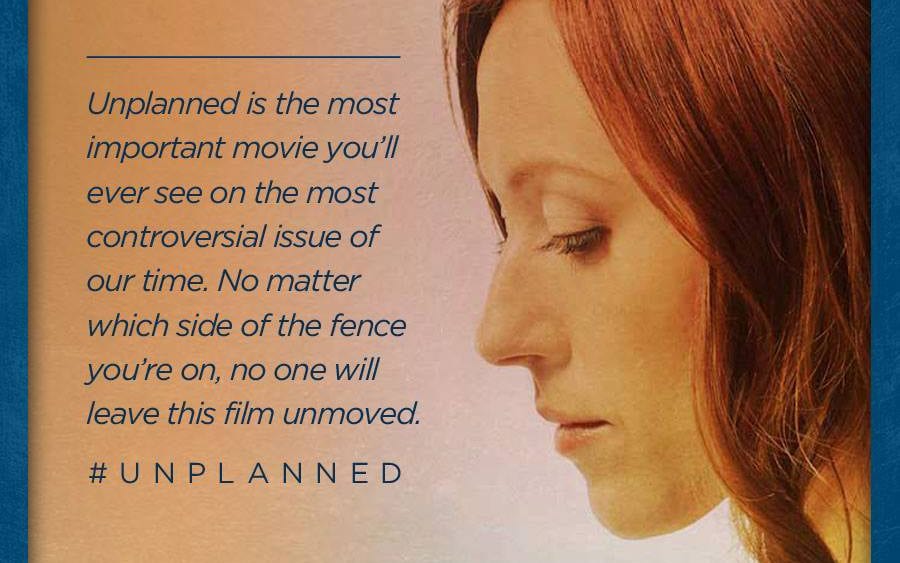 LOS ANGELES, March 31, 2019 /Christian Newswire/ — The controversial abortion biopic UNPLANNED overperformed its pre-release projections to become the #5 movie at the box office this weekend. The film took in an estimated $6,110,000 or a cumulative per-screen average of $5,770 on only 1,059 locations across the country. The film received a rare A+ CinemaScore.

Industry projections underestimated the film’s performance, predicting $2 million to $3 million. Despite a widespread paid media blackout across mainstream and some faith-based outlets and a Saturday morning Twitter ban that was quickly lifted after online outrage, the film’s strong word-of-mouth propelled audiences to fill theaters across the country. Next week the film’s distributor plans to add an additional 600 screens for a count of 1,700 screens.

Partially financed by MyPillow executive Mike Lindell, the film is the true story of Abby Johnson, a former rising star in the Planned Parenthood corporation. As one of the youngest clinic directors in the nation, Johnson was involved in upwards of 22,000 abortions and counseled countless women on their reproductive choices. Her passion surrounding a woman’s right to choose led her to become a spokesperson for Planned Parenthood, fighting to enact legislation for the cause she so deeply believed in, until the day she saw an ultrasound guided abortion that changed everything.

“We are very happy for the success of this film,” said Pure Flix president Michael Scott. “To bring the story of Abby Johnson to audiences and have them show up in such large numbers shows how the topic of abortion is so important to our nation. We hope that those on both sides of the pro-life and pro-choice debate will see Unplanned and begin to have a productive dialogue. This film can be that spark to bring more hearts and minds to understanding the value of life.”

The film made national news last year when its lead actress Ashley Bratcher revealed that it wasn’t until she was on set and filming that she learned that when her mother was pregnant with her, she nearly aborted her. Controversy has subsequently dogged the film, first when it earned an R rating from the MPAA, then when several television and radio networks refused to air commercials for the film and most recently on Saturday when Twitter suspended the film’s page only to reverse itself an hour later after fan outcry and media inquiries. Going into the weekend, trailer views for the film had reached 250K. By Saturday morning, after an evening of strong word-of-mouth, trailer views climbed to 1.7 million. The film has a 93% positive audience score on Rotten Tomatoes.

“I am blown away by the public response to UNPLANNED as well as the box office numbers,” said Bratcher. “Not only is it beyond my wildest dreams, but it has surpassed the expectations of critics across the country. Despite biased critic reviews written more like op-eds, the audience has spoken. I just learned that Unplanned received a coveted A+ CinemaScore. While that is truly an honor, the most rewarding thing about this weekend’s opening is the flood of messages I’ve received from people experiencing healing and a change of heart.”

UNPLANNED was written and directed by Cary Solomon and Chuck Konzelman, the writers/co-producers of God’s Not Dead and God’s Not Dead 2, also distributed by Pure Flix Entertainment.

“We are thrilled, gratified and humbled,” noted Solomon and Konzelman. “We are so pleased that the American people have responded with such an enormous outpouring of support at the box office. It humbles us, and we look forward to seeing what happens in the weeks ahead.”

For interviews, contact: Kevin Wandra (404-788-1276 or KWandra@CarmelCommunications.com) or Alexis Walkenstein (561-445-5409 or walkensteina@gmail.com) of Carmel Communications.

This story originally appeared on http://christiannewswire.com/index.php