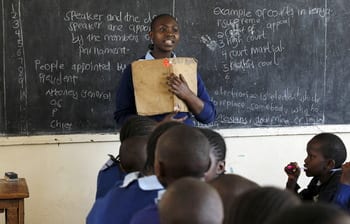 A young woman leads her classmates at a primary school in Nairobi, Kenya, Sept. 9, 2015. The empowerment of women was the focus of a March 19 panel discussion at the United Nations, with the speakers saying that women should not be required to divest themselves of femininity to achieve empowerment and gender equality. (CNS photo/Thomas Mukoya, Reuters)

UNITED NATIONS – Women should not be required to divest themselves of femininity to achieve empowerment and gender equality, according to panelists at a March 19 event at the United Nations.

Women’s dignity and distinctiveness also must not be sacrificed to win social protections, public services and sustainable infrastructure, they said.

Speakers addressed “Protecting Femininity and Human Dignity in Women’s Empowerment and Gender Equality Policies Today” at a side event to the 63rd session of the Commission on the Status of Women. The program was co-sponsored by the Vatican’s Permanent Observer Mission to the United Nations.

“True respect for woman starts with accepting, indeed reverencing, her according to all aspects of her humanity,” said Msgr. Tomasz Grysa, who is first counselor at the Vatican’s U.N. mission. “It involves creating the social conditions for her to live freely and fully, without discrimination, according to her feminine genius, the special wisdom she has in caring for the intrinsic dignity of everyone, in nurturing life and love and in developing others’ gifts.”

“When women are given the opportunity to thrive in full appreciation for all their talents and potential, the whole of society benefits,” he added.

The full dignity of women should be promoted and protected with regard to marriage, motherhood and family life, Msgr. Grysa said. Because the unique value and dignity of motherhood is insufficiently defended, appreciated and advanced in some societies, women must choose between intellectual and professional development and their personal growth as wives and mothers.

“Women’s essential contributions to the development of society through their dedication to their marriage and to raising the next generation are inadequately acknowledged … and disparaged as an antiquated and unwholesome model of feminine life,” he said.

Msgr. Grysa said, “We need more than words condemning all forms of unjust discrimination against women. We need more than social protections, access to public services and sustainable infrastructure that allow women to take up work outside the home or even to enable them to meet their families’ needs without needing to sever their maternity from their femininity.

“We need an effective and intelligent campaign for the promotion of women, concentrating on all areas of women’s life and beginning with a universal recognition of their dignity,” he added.

Sue Ellen Browder, a journalist and former 20-year writer for Cosmopolitan magazine, said the real conflict between women is not over feminism, but the false joining of feminism with the sexual revolution.

“What strong pro-life feminists oppose is destroying a woman’s dignity by reducing her personhood to her sex organs, her sexual desirability and her sexual urges and then pretending this animalistic reduction of her dignity is somehow a form of ‘freedom,'” Bowder said.

“To bring peace to this war on women in the world, we need to separate true feminism from the sexual revolution in our minds and the minds of others,” she said.

Browder traced the history of the modern women’s movement from the early 1960s. She said leader Betty Freidan and other feminists fought for equal opportunity for women in academia and the workforce, not abortion and contraception.

According to Browder, the male founders of the National Abortion Rights Action League persuaded Freidan “to insert abortion as a ‘right’ into the women’s movement.” The decision to do so split the feminist movement, a division which persists today.

“Separate feminism from the sexual revolution in your mind and heart. Then you will at last set women and girls truly free,” she concluded.

Retired U.S. Navy Cmdr. Susan Yoshihara realized an unexpected appreciation of her unique femininity in the middle of a task she was assigned to because she was a woman.

During a mission in the South China Seas, the combat logistics pilot was replaced by a male pilot in her helicopter seat after landing on the deck of a ship. She was assigned to bathe Vietnamese women who had been rescued by the Navy and brought aboard the ship from small boats as they fled Vietnam.

In the midst of her anger over temporarily losing her flight position in a competitive field, Yoshihara was brought to earth by the sight of a woman cowering in the shower wearing only a small medallion of Mary. Yoshihara felt ashamed when she realized the woman expected her to take the medal.

Yoshihara was reminded of religious sisters from her high school who were similarly devoted to Mary. She was able to lighten the mood and help the women relax and laugh as they dressed in oversized donated men’s clothing.

Yoshihara said her experience that night, far from the top ranks or the front lines, was a reminder that small acts of kindness bring happiness under and on the way to the mythical glass ceiling.

Yoshihara is senior vice president for research at the Center for Family and Human Rights.

Anne Kioko, the founder and director of the African Organization for the Family, said some international policies are out of sync with what women and girls actually need. As a result, some organizations that claim to represent women at the grassroots do not speak for their reality.

She said girls in the rural Kenyan village where she was raised do not need contraception to be empowered. They also do not need policies that prioritize abortion or comprehensive sexual education curricula that “reduce women to her sexualization,” she said.

Instead, girls will be empowered by access to good education, competent medical care and clean, accessible water, she said.

Kioko said abortion is illegal in Kenya, but an international organization affiliated with the United Nations provides it. “Why must we continue to see … that giving a mother the right to take the life of her baby in the womb is essential to her empowerment?” she asked.

“When abortion is prioritized for women like those in my country, it is not the woman we are protecting, it is the bloodthirsty abortion industry,” Kioko said.
Lila Rose, founder and president of Live Action, described abortion as a global crisis. She said the solution to the mistreatment of women is not to abolish the differences that exist between men and women, but to celebrate the totality of womanhood, including the ability to become mothers.