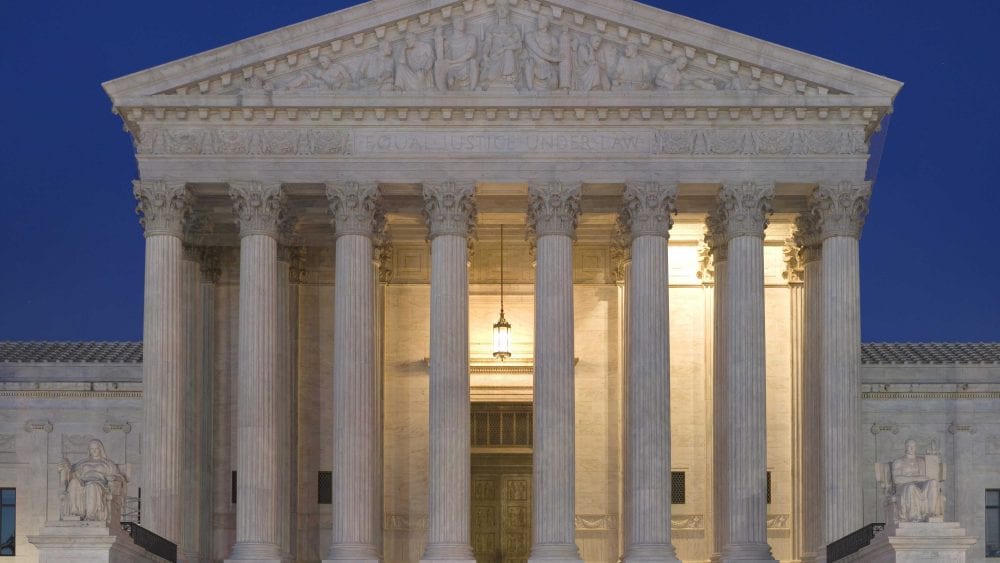 WASHINGTON (CNS) — Optimism among pro-lifers ran high March 3 for a successful outcome to the first abortion case heard by the Supreme Court in four years.

It also is the first such case heard by new Justices Neil Gorsuch and Brett Kavanaugh, both appointed by President Donald Trump and considered favorable to pro-life issues.

“This one, I expect, will be a win,” said U.S. Rep. Mike Johnson, R-Louisiana, at an afternoon news conference at the National Press Club in Washington.

On March 4, the court hears oral arguments in June Medical Services v. Russo, a challenge to a Louisiana law, passed in 2014, that requires abortion providers to have “active admitting privileges” at a hospital within 30 miles of the abortion facility.

Without the privileges, the law imposes a fine of up to $4,000 per violation and imprisonment for up to two years, with loss of a doctor’s medical license.

The law is nearly identical to one in Texas struck down by the Supreme Court in Whole Woman’s Health v. Hellerstedt in June 2016. The court ruled the Texas law created a burden to women’s access to abortion and was therefore unconstitutional.

A victory for the Louisiana law will be considered a key step in chipping away at Roe v. Wade, the 1973 court decision legalizing abortion on demand, by moving the issue to state legislatures instead of the Supreme Court.

Critics call it a “TRAP law,” meaning, “Targeted Regulation of Abortion Providers,” because it could force abortion facilities to close because they have not followed safety requirements, which supporters of legal abortion consider a guise, when the aim pro-life advocates is to end abortion altogether.

A federal district court in Louisiana decided the law did exactly that and blocked the law, but the U.S. Court of Appeals for the 5th Circuit, finding that the law was distinguishable from the Texas law, overturned that ruling in 2018, leading to the Supreme Court hearing.

“This industry needs to be regulated, and if anyone tries to tell you otherwise, they’re not looking at the facts,” Johnson said. Referring to some abortion facilities in his state as “a house of horrors, literally,” with poor after-abortion care and rusty instruments, he accused abortion providers of having “a financial interest in making sure their care is substandard.”

Arkansas Attorney General Leslie Rutledge, who has filed a 20-state friend of-the-court, or “amicus,” brief in the case, called abortion providers “more interested in getting to the ATM than they are in getting these women to the ER” when complications such as bleeding from a perforated uterus occur.

The high court also will examine a separate petition by Louisiana that questions if the abortion providers have the legal standing to challenge the state law on behalf of their patients.

Louisiana argument also will oppose doctors’ “standing to sue” if the Supreme Court agrees that abortion providers can no longer mount court challenges to regulations that could close their facilities.

“What were we motivated by? It’s love. It’s just that simple,” said Louisiana state Sen. Katrina Jackson, a Democrat, who sponsored the law, known as Act 620. “Roe v. Wade did not say that state legislators could not legislate involving women’s health.”

Jackson said that law showed “love for the women, for the unborn child, and for those we pass every day who unfortunately may make this decision (to have an abortion).”

If the court upholds Act 620, “We’re very happy that the Supreme Court will no longer be the national abortion medical board,” said Angie Thomas, director of Louisiana Right to Life.

Students for Life planned a prayer vigil followed by an all-night vigil on the Supreme Court sidewalk March 3.

The justices are expected to issue a decision at the end of the court’s term in June.