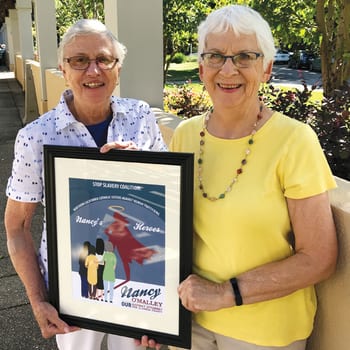 Dominican Sister Judy Lu McDonnell, OP, left, and Lyn Kirkconnell, right, co-creators of the congregation’s peace, justice and care for creation efforts, were among the local Catholic sisters who received a public service award in August for combating human trafficking. Catholic sisters from 10 local congregations of women religious were honored this summer by Alameda County District Attorney Nancy O’Malley for their collective effort combating human trafficking in the Bay Area since 2016. (Courtesy photo)

The “Stop Slavery Coalition: Northern California Catholic Sisters against Human Trafficking,” which includes one to two representatives from each congregation and their associates, received the “Nancy’s Hero Award” for their collective effort distributing anti-human trafficking posters to almost 1,000 Bay Area businesses which must display them in accordance with California law.

O’Malley created the award to recognize individuals whose efforts have resulted in a better Bay Area community and held an Aug. 16 barbeque in their honor in Pleasanton.

“I am so grateful for the commitment you and your fellow sisters have shown to educate the community about human trafficking. Your work makes a huge difference,” she said.

The posters were designed by the California Department of Justice after two pieces of legislation were passed in 2013, and amended in 2017, requiring certain types of businesses including hotels and motels, massage parlors, truck stops, hospital emergency rooms, adult bookstores, bus stations, airports and labor contractors to display human trafficking awareness posters on their premises.

The posters can be a visible deterrent to human trafficking, help management and employees recognize and report the crime that occurs in their establishments, and provides victims with an anonymous, 24-hour help hotline accessible in 160 languages.

Lyn Kirkconnell, a lay member of the Stop Slavery Coalition and one of the co-creators of peace, justice and care for creation efforts for the Dominican Sisters of San Rafael, said coalition members educated and trained volunteers to visit almost 1,000 businesses in San Francisco, Alameda, Santa Clara, San Mateo and San Joaquin counties over the course of the last three years.

Kirkconnell said the sisters helped to train local hotel staff in advance of the America’s Cup in San Francisco in 2013 and Super Bowl 50 in 2016.

“The legal requirement to display the anti-trafficking poster has enhanced this work,” she said.

Human trafficking is a form of modern-day slavery, according to the U.S. National Human Trafficking Hotline, the organization whose (888) 373-7888 number is the prominent feature of the posters the sisters are helping to distribute.

HAIL TO THE QUEEN: Queen Gipson was treated like royalty during a 95th birthday celebration Sept. 13 that included pastors and parishioners of Our Lady of Lourdes, All Hallows Chapel and St. Paul of the Shipwreck. Born Sept. 18, 1924, in San Francisco, Queen has been a 70-year parishioner of the three Catholic parishes in Bayview/Hunters Point that are linked by one pastor, Father Dan Carter.

LINE-UP FOR LIFE: The first weekend of the fall campaign for the San Francisco chapter of 40 Days for Life got off to a great start at the Planned Parenthood on Valencia Street Sept. 28, says campaign coordinator Clarisse Siu. The first-ever fall campaign runs from Sept. 25 to Nov. 4, with volunteers in prayerful vigil outside the Mission District location on Valencia and a new planned location on Bush Street. Visit 40daysforlife.com/san-francisco.

During Tom Burke’s absence, email items and high-resolution images to CSF staff at csf@sfarch.org and/or mail to Street, One Peter Yorke Way, San Francisco 94109. Include a follow-up phone number. If requesting a calendar listing, put “Calendar” in the subject line.