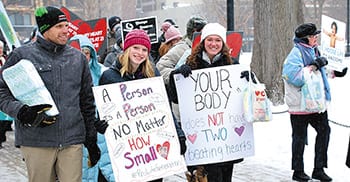 Weather doesn’t stop those marching for life in Madison

MADISON — In both years that a march for life has returned to Madison, providing a witness to an end to abortion and respect for life at all stages, weather has been part of the story, but certainly not the full story.

While some buses and other transportation couldn’t make it to the capital city, more than 400 people of all ages provided that witness. They didn’t let the snow and cold stop them from showing that love and life is more important than whatever earthly obstacles might appear in the way.

The March & Love for Life in Madison was held on January 22, the 46th anniversary of the Roe v. Wade U.S. Supreme Court decision that legalized abortion in all 50 states. Since 1973, nearly 61 million lives of the unborn have been lost to abortion, and an incalculable amount of lives, of their mothers and others, affected.

Prior to the march to the State Capitol, Mass was celebrated at St. Patrick Church in downtown Madison.

Deacons Jim Hoegemeier and Chris Schmelzer assisted with the Mass.

During his homily, Monsignor Bartylla thanked everyone for coming and for everyone who had a hand in planning the evening, including Deacon Dick Martin from St. Maria Goretti Parish.

He said there was a “virtue of perseverance” present among those gathered, especially with the oncoming snow.