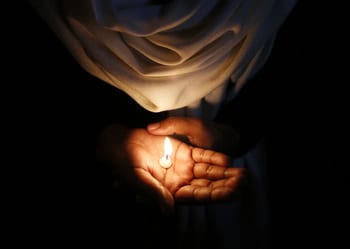 Why many women in some Indian villages have no wombs

A Christian in New Delhi holds a candle during a solidarity vigil March 16, 2015, for a nun who was raped during an armed assault. (CNS photo/Anindito Mukherjee, Reuters)

Many poor Indian women working in cane-cutting fields have their wombs removed because employers are unwilling to hire women who menstruate, an Indian newspaper reported April 8.

“You will hardly find women with wombs in these villages,” says a woman interviewed by the Hindu Business Line in the Beed district of Maharashtra state in west central India. “These are villages of womb-less women.”

The report was the most recent on gender abuse in India, a country that human rights advocates and the U.N. rank as among the world’s most inhumane toward women and girls.

The field workers forced into hysterectomies to keep their jobs “are not the only women in India suffering such grave abuse,” an advocate responded in an article posted on the website of the Asian Human Rights Commission. “The World Economic Forum ranked India at an abysmally low 108th in its Gender Gap Index out of 149 countries. When it comes to women’s health and survival, India ranks 147th.

“The abuse of Indian women begins right from the womb – the same wombs these women are forced to remove,” the article said. “Many of them get killed in the wombs itself, as is evident from the sex ratio at birth that fell from 908 in 2012, to 877 in 2016. The government of India’s own National Economic Survey too confesses the same, gravely noting that 63 million women are missing from its population across all ages, with another two million disappearing every year- most of them to either female feticide or infanticide.”

In September 2018, India’s Supreme Court lifted the ban on entry of women of menstruating age – between 10 and 50 – to a temple in southern India, on grounds of nondiscrimination, equality and women’s right to practice religion, the article said. The decision prompted protests from devotees, including women, who tried to stop girls and young women from entering the temple.

India was the named the most dangerous country for women in a Thomson Reuters Foundation 2018 survey, a drop from fourth-worst seven years earlier.

“The world’s second most populous nation, with 1.3 billion people, ranked as the most dangerous on three of the topic questions – the risk of sexual violence and harassment against women, the danger women face from cultural, tribal and traditional practices, and the country where women are most in danger of human trafficking including forced labor, sex slavery and domestic servitude,” the foundation said.

In 2010, a Harvard School of Public Health researcher found systematic abuse of pregnant women in India.

“Our findings paint a clear picture,” said researcher Jay Silverman. “From birth through motherhood, too many South Asian women and girls suffer from a life where being female deprives them of the most basic resources. This inequity is often enforced and maintained by violence – making them more likely to become ill and to die.”

In 2018, The Lowy Institute, an independent, nonpartisan think tank based in Sydney, Australia, found that “Illegal sex selection and gender-based abortions remain unchecked across social and economic groups in India. Even though sex selection is against the law, illegal gender-based abortions have been blamed for a sex ratio in the last census of 940 females to every 1,000 males.”

Violence against women in India is systematic and occurs in public and private space, U.N. Special Rapporteur Rashida Manjoo found in a 2014 report.

“It is underpinned by the persistence of patriarchal social norms and inter- and intragender hierarchies,” the report stated. “Women are discriminated against and subordinated not only on the basis of sex, but on other grounds, such as caste, class, ability, sexual orientation, tradition and other realities. That exposes many to a continuum of violence throughout the life cycle, commonly referred to as existing ‘from the womb to the tomb.’ The manifestations of violence against women are a reflection of the structural and institutional inequality that is a reality for most women in India.”

Nearly three rapes per hour were reported in 2012, according to government statistics cited by the U.N.

“Many victims of sexual violence carry a deep sense of shame, which is further exacerbated by the stigma and exclusion they experience, especially from family members and the community, and which may result in suicide,” the U.N. report said.

In a 2016 article posted on the website of Global Sisters Report, Virginia Saldana correlated abuse with a religiously based power imbalance in India. The article quoted Presentation sister and theologian Shalini Mulackal.

“Women have internalized patriarchal Christianity. They are comfortable with just a little space that is given to them,” Sister Shalini said. “The language, symbols and culturally conditioned interpretation of religious scriptures have evolved a practice that alienates women and even influences exploitation and violence toward them.”

The article quoted Shaji George Kochuthara of the Carmelites of Mary Immaculate as saying that although church teaching professes the equality of women, it promotes the notion of complementarily assigning fixed roles to women and men, with women usually in passive and subservient positions. Procreation is the center of the marriage relationship and love, equality, respect and mutuality are ignored, he said, maintaining that the imbalance legitimates violence and covertly controls women’s sexuality while church leadership remains silent on the consequences.

Indian police charged Bishop Franco Mulakkal of Jalandhar with repeatedly raping a nun in her rural convent, with a charge sheet that is 2,000 pages long, Catholic News Service reported April 10, 2019.

On Sept. 24, the bishop was taken into judicial custody. The Vatican removed him from diocesan administrative duties, but he retained his title as its bishop.

The Kerala High Court granted bail Oct. 15 on condition that the bishop, based in northern Jalandhar City, should not enter Kerala state other than to report once a fortnight to investigating police.

A week later, Father Kuriakose Kattuthara, 67, considered a prime witness against the bishop, was found dead, with his family suspecting foul play.

The nun’s case led to an outcry from women religious, with more reporting cases of abuse.

In November, the International Union of Superiors General called on women religious who have suffered abuse to come forward and report it to their congregations and church and state authorities.

Global Sisters Report talked to five Missionaries of Jesus in India who complained of church repression for their support of their former superior general, who made the accusations.

“The Catholic Church leadership has been treating us as outcasts after we went public against Bishop Franco Mulakkal (of Jalandhar). Even the Vatican has not bothered to acknowledge our complaints,” Sister Anupama Kelamangalathuveli, spokeswoman for five Missionaries of Jesus nuns, told Global Sisters Report earlier this year.