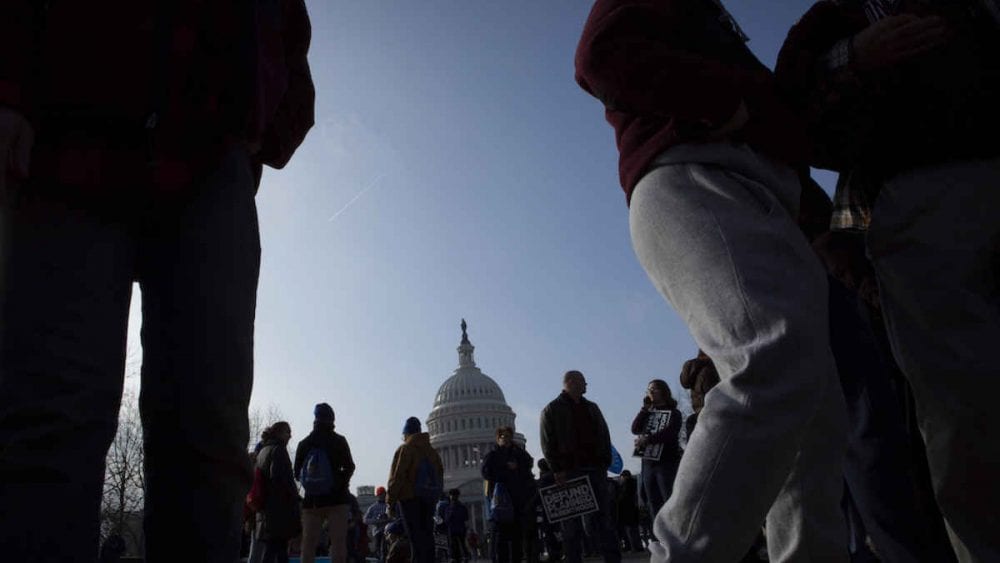 Speaking behind a small podium outside the House of Representatives, Rep. Chris Smith, R-New Jersey, delivered a message to his political opponents: “We reach across the aisle and say to our friends on the Democratic side, please, at least on this one, help these live-born children!”

Smith’s comments came after Democrats in the Senate voted almost uniformly to block the Born-Alive Abortion Survivors Protection Act, a bill that mandates elevated standards of care for live-born children who have survived an abortion procedure, as well as instituting tough penalties for doctors who fail to provide this care.

Current federal law recognizes babies born alive at any point of pregnancy as people, but does not outline the medical care they are due.

The vote, which took place late Feb. 25, would have brought the Senate closer to a floor vote on the bill if it had garnered 60 “yeas.” It only received 53, with every Republican present voting in its favor along with three Democrats who broke party ranks. The 44 Democrats voted “nay.”

Walorski reported during the news conference that she would be calling for a similar vote on the House version as soon as possible.

“Will this Congress stand for a culture of life, or will it allow a radical, anti-life agenda to put children’s lives in danger? It’s time to vote on the Born-Alive Abortion Survivors (Protection) Act. I call for that vote today, and I urge my colleagues to vote yes. … This is a pro-life country,” said the congresswoman. The author of the House version is Wagner.

All the representatives condemned the actions of the Senate and extolled the bill as the proper way to counter controversial pieces of legislation presented or passed in states such as New York, Virginia and New Mexico which eliminate virtually all restrictions on the procedure.

“The Senate last night stood against protecting children. … They stood in favor of legalized infanticide,” related Walorski, “The bills and the laws we’ve seen in New York and Virginia are horrifying, that’s why we’re here today.”

Scalise recounted his shock at the celebratory attitude states took toward the bills which lifted abortion restrictions and added he would take necessary steps to expedite Wagner’s bill.

“When I first heard about this practice and saw the governor of New York almost having a pep rally describing legislation that would allow a baby to be killed, murdered … nowhere in America should that be legal,” said Scalise. “We have to pass Ann Wagner’s born-alive bill, and I’ve filed … a rule that in the next few weeks will be eligible to start getting signatures.”

Scalise was referring to a discharge petition, which would hasten the bill’s progression through the House.

“Anybody who says they’re pro-life ought to sign that discharge petition, and if we get 218 signatures, which I’m confident we can, that will allow that bill to come to the floor for full debate and ultimately a vote,” continued Scalise.

Critics of the “born alive” bills have argued that there is no factual basis for supplementing the protections already present in federal law.

According to the Washington Examiner, for example, Sen. Tim Kaine, D-Virginia, claimed: “When you have hearings on bills you get the facts out and you explore whether it’s needed. … They didn’t even want to bring it to committee and that tells me I don’t think they had a real case to justify the bill.”

Kaine was referring to the effort by Sen. Ben Sasse, R-Nebraska, to call for senators’ unanimous consent on his Born-Alive Abortion Survivors Protection Act, S. 311, in early February. He invoked Senate Rule 14 to bypass the committee process on the bill, saying that “everyone in the Senate ought to be able to say unequivocally that killing that little baby is wrong.”

His effort failed which led to the Feb. 25 roll-call vote to advance S. 311,which fell short of the votes needed.

Smith, however, presented some statistics that suggest there is a problem that the bill is designed to solve. During the news conference, he said: “The CDC (Centers for Disease Control) reports that, in Florida over a 10-year period, 143 babies died after being born alive during botched abortions, and this number is likely a low estimate due to poor reporting practices.”

Mallory Quigley of the pro-life Susan B. Anthony List also noted that the American people are largely supportive of this kind of legislation.

“According to a poll that we released earlier this month,” she said, “77 percent of voters support this legislation simply to ensure … that these babies born alive during failed abortions have the same rights as premature babies born at the same time. … Only 9 percent oppose the bill.”