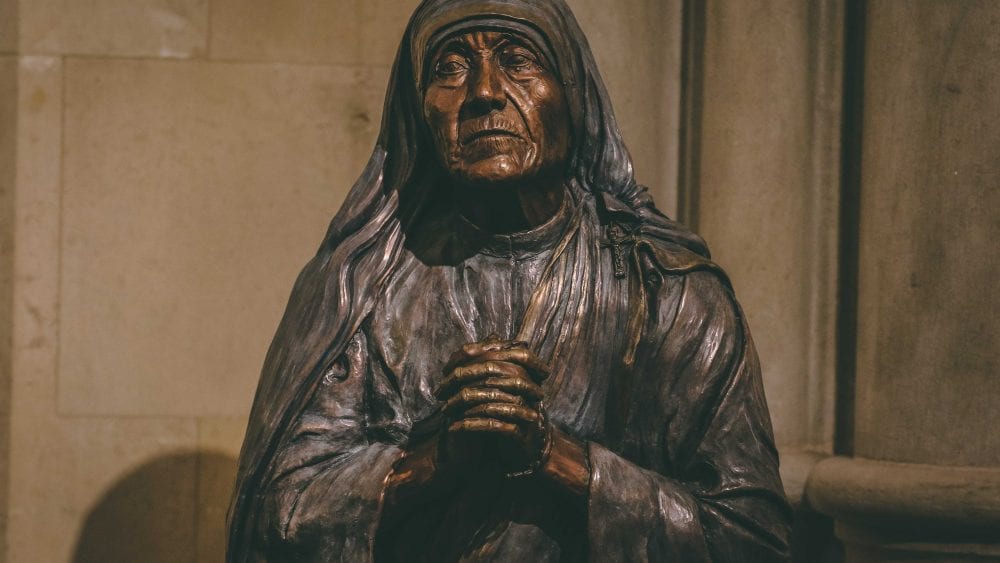 Before the crowd at an April 10 hearing of the Senate Judiciary Committee’s Subcommittee on the Constitution, Sen. Ted Cruz, R-Texas, displayed a billboard containing a tweet of a St. Teresa of Kolkata quote, “Abortion is profoundly anti-woman. Three quarters of its victims are women: Half the babies and all the mothers.”

Alongside the quote was a picture of the saint, smiling.

The graphic in question was posted to Twitter March 8 by Marjorie Dannenfelser, president of the Susan B. Anthony List. The national pro-life organization had intended it to run as a promoted ad, but Twitter ensured that it never saw the light of day by removing it immediately.

The reason for the ban? The graphic purportedly violated Twitter’s “health and pharmaceutical products and services policy.”

Details on that policy from Twitter’s website are vague, listing entities to which those restrictions apply from country to country while providing only cursory explanations for why the restrictions themselves are necessary, for example, stating that “unless listed below, the promotion of health and pharmaceutical products and services is prohibited.”

Such an explanation makes the ban of a St. Teresa quote questionable.

Equally ambiguous was Monje’s answer to Cruz’s question. After a brief silence, he said, “I believe that (tweet) is from the Susan B. Anthony List, and Susan B. Anthony is currently an advertiser in good standing on our platform.”

Cruz interrupted, trying to refocus the conversation: “You’re very good at not answering questions. Is this hate speech?”

Monje again demurred: “Every tweet has context behind it. … I can tell you that we have actioned accounts on both sides of this debate, including tweets by pro-choice groups who have said that everybody who is pro-choice is misogynistic.”

This was just one of many tense exchanges during the hearing, which was called by the subcommittee to evaluate what role large technology companies might play in coercing conversations that occur on their platforms, up to and including censorship of certain viewpoints.

Cruz, who was concerned with blockage of conservative and pro-life perspectives online, delivered a fiery opening statement, where he decried “the ability for a handful of giant tech companies to decide if a particular speaker is disfavored … and (if) their words may fade into the ether.”

He offered three potential solutions to “big tech” censorship: amending Section 230 of the Communications Decency Act, which he claimed “provides a special immunity from liability that big tech enjoys that nobody else gets,” leveraging antitrust laws against tech companies for monopolizing online speech, or charging those companies with fraud for falsely portraying themselves to customers as neutral public forums.

When Sen. Mazie Hirono, D-Hawaii, who is ranking member on the subcommittee, got her turn, she brushed off Cruz’s concerns as mere conspiracy theories.

“There are many areas where the Senate should be conducting oversight of the tech industry … baseless allegations of anti-conservative bias is not one of them,” said Hirono.

She went on to say that conspiracy theories and hateful rhetoric she said the alt-right propagates still abound on many social media platforms, and thus demonstrate the need for stricter content restrictions on internet media.

She even blamed conservatives at large for spreading falsehoods about the Sandy Hook, Connecticut, school shooting, arguing that if conservatives wanted more favorable treatment from media companies, “they shouldn’t use their platform to harass and spread lies about a dad who lost his little girl in the most tragic way possible.”

Hirono was referring to Robbie Parker, who lost his daughter in the shooting and was at the hearing that day as a witness. He remains a target of alt-right figures who claim that the incident was staged.

The Susan B. Anthony List has claimed that Twitter has discriminated against it many times, especially during the 2018 midterm elections when many of their public endorsements of pro-life candidates were banned from Twitter and reinstated shortly afterward, sometimes only after the organization had appealed the decision.