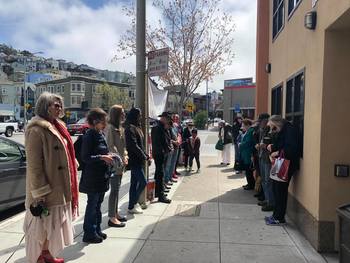 A heightened profile for pro-life activism this year has led to San Francisco’s first fall 40 Days for Life campaign. Local 40 Days organizer Clarisse Siu said that after last year’s assault on volunteer Ron Konopaski and the release of the pro-life film “Unplanned,” pro-life vigils have seen “a huge increase in participation.”

“In previous years, it’s been please come and now we have more people coming,” Siu said. “We wanted to capitalize on the momentum and have people come out more regularly.”

The fall prayer vigil campaign will run Sept. 25 through Nov. 3.

40 Days for Life is a non-sectarian organization, but historically the vigils in San Francisco have been attended by mostly Catholics. The increased interest in offering pro-life witness has begun changing that, Siu said.

“We’re getting a lot more people who aren’t just Catholic,” she said.

Siu said she hopes 40 Days can sign up enough people to have someone praying every day outside Planned Parenthood, at its Valencia Street location and on Sundays in front of the soon-to-be-opened Bush Street clinic. “If we could get up to 12 hours covered every day we would be over the moon. So far we’re halfway there but we have many days that are unfilled,” she said.

Siu encouraged anyone interested to sign up or contact the local 40 Days for Life team for more information or to address concerns. “It’s very peaceful, prayerful and for the most part completely uneventful,” she said.

“In our spring campaign, we know we saved at least two children because their parents came and told us,” she said. “And we’ve had tons of women come to us and counter-protesters acknowledge our point of view. So much good comes from our prayerful presence. If you have any questions, you can come and ask us.”

Visit 40daysforlife.com/local-campaigns/san-francisco/ for more information or to sign up.