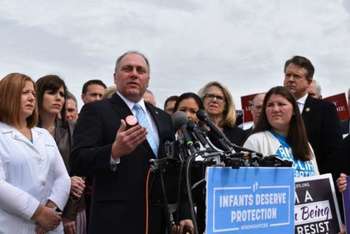 WASHINGTON – Five months after first attempting to force a vote on legislation to protect babies who survive botched abortions, pro-life Members in the House are still at a standstill.

“This is not even a pro-life or a pro-choice issue. This is an issue of someone’s right to life, liberty, and the pursuit of happiness,” Rep. Ann Wagner (R-Mo.) told CNA on Tuesday. “This is equal protection under the law.”

“The human rights of children are being violated,” said Rep. Chris Smith (R-N.J.), who leads the House pro-life caucus, at a congressional hearing on Tuesday on the Born-Alive Abortion Survivors Protection Act, yet “very little is being done.”

Wagner introduced the Born-Alive Abortion Survivors Protection Act (H.R. 962) in February.  The legislation would require that any baby surviving a botched abortion attempt receive the same standard of medical care that any other child would if born at the same gestational age.

Health care providers who fail to do so could be fined and face up to five years in jail, though no mother could be prosecuted in any such case under the bills provisions. The mothers could, however, take civil action to obtain relief in the event a provider does not provide the care to the child.

“To carry this piece of legislation is a joy, an absolute joy. A struggle, but all things that are hard and important are,” Wagner told CNA on Tuesday.

Days prior to the bill’s introduction in the House, controversial comments by Virginia State Delegate Kathy Tran (D), and later by Gov. Ralph Northam (D), catapulted the issue into the national spotlight.

Tran, speaking about her legislation at a hearing, told a legislative committee hearing that her bill would allow for abortions throughout the third trimester, including while a woman was in active labor, so long as one doctor determined that the abortion was necessary for the woman’s physical or mental health.

“We want the government not to be involved in these types of decisions,” he said.

Comments from Democratic presidential candidates have suggested support for legal abortion up until birth, at least in some cases.

Former congressman Robert Francis O’Rourke recently said at a campaign stop that such decisions should be left up to the mother, even if she were seeking an abortion one day before birth. Peter Buttigieg has said the decision about when a child’s life begins is ultimately the mother’s.

With Democratic presidential candidates talking about access to late-term abortion, and pro-life members of Congress trying to force a vote on protecting abortion survivors, the issue is growing to become a key part of the 2020 elections.

Wagner’s bill has 190 cosponsors but has not been considered for a vote. It hasn’t been for lack of effort, especially at the procedural level. House Democratic leaders have refused requests for unanimous consent to have a vote on the legislation, more than 80 times.

On April 2, House Minority WHIP Steve Scalise (R-La.) filed a Motion to Discharge a Committee from the Consideration of a Resolution, or a “discharge petition.” If the petition gained the signature of a majority of the House—218 Members—it would move the bill to the House Floor for a full vote.

The petition garnered 193 signatures immediately and subsequently received eight more, but since June 4 there have been no additions.

“It is unconscionable that Democrats have not allowed a vote on this bill requiring the most basic care,” March for Life president Jeanne Mancini stated.

“Once again, we urge House Democrats from Republican-leaning districts to listen to their constituents and sign Whip Scalise’s discharge petition to hold a vote on this lifesaving bill,” Susan B. Anthony List president Marjorie Dannenfelser stated.

Over the August recess, pro-life groups were reportedly working at the grassroots level to get more Democrats onto the petition, Wagner said.

“We hope that they’ve heard from their constituents and will come back. The board is open as of today, they can sign the petition, and just allow this to come to a vote,” she told CNA. “And so I believe that they’re going to be held to account, I hope, by the voters.”